A downloadable game for Windows and macOS

The  Other is an art-game about relationship with the Other that was heavily inspired by J.-P. Sartre. It has 3 levels of depth: emotional, psychological and philosophical.

The Player can interact with 3 objects in the room... or not. Not doing anything is also a choice. The next state of the Other and the Room itself will depend on what the Player have done previously. The Other remembers everything and responds accordingly.

The recommended resolution is 1920x1080.
(If the game is too slow, try lowering the resolution. Don't run it on 4K and more)

I'd like to explain that this project was my final (Bachelor's) work at Zurich University of the Arts. The production time was about 3,5 mounths. Everything in this game is made by me except the things listed in Credits.

Woah! This game was very good.

I never got to finish everything in it, and I'm unsure how exactly I could progress. I'm supposing I may have had to hurt the character, but I felt bad for them and didn't want to. :(

They truly do remember everything. You said that, but I didn't foresee it as much as it was. I broke the ball once on my first playthrough, I didn't realise you could use items on other items, and the character consistently brung it up afterwards.

I'm not too sure what the difference is between the main game and Afterstory, as it told me upon exiting that I had reached but not completed it. I didn't really know what it was.

Regardless, still an excellent game!

I really enjoyed it.

P.S. - My friend keeps prompting me to hurt the character. I refuse.

You are really sweet for not wanting to hurt the character, for some people it's the very first option XD

Yes, the Other remembers things, but some are more impactful than others. Breaking stuff is something they'll reference a lot, especially if scared XD The reactions change depending on what you've done previously and which room you are currently in.

Story is something you create/discover when you use the same action twice: the Other tells you a part of your mutual story and it gets written on the walls of the main hall. Basically, Story is the in-game experience where you discover who your "character" is and what kind of relationship they have with some particular Other.

Afterstory is seen through the change in the VO style (I talk with my normal voice through the "phone" filter) and the character of replies :) And it's about the outside-of-the-game reflection. To simplify, in the Story the Other talks to your character, in the Afterstory  the Other is talking to you ;)

There is no real "game ending", because you can stop at any moment and it's ok.  Technically, you can consider the game absolutely "finished" when the Other runs out of new replies to any of your actions. If you can't do anything new, it's kind of done XD

But "finishing" the game is also a choice. There are many options for the player's motivation to do or NOT do things.

It's an art-game, an art-project. So the main goal is to make you feel and think. But if someone perceives it as a game in which you have to unlock all the content and get an "achievement", that also says something ;)

P.S. You don't have to hurt the Other is you don't want to, but your friend absolutely can.

Hey! Sorry I took so long to respond.

I was at my girlfriend's house when I got the notification for your response, so I didn't reply then, and I sort of forgot afterwards.

Thanks for the clarification!

I did end up re-playing this over a discord stream to the friend I mentioned, and we decided what to do together.

We got kicked out of the room thrice from our actions, if I remember correctly. They were very terrified of us, mostly - for good reason.

(When we stopped playing, we did make sure they were happy one final time, though).

As it stands now, I still haven't gotten around to trying to do everything, but I do plan to. Tomorrow I'm going to a sleepover with some friends where I'm going to play some itch.io games with them; I might see how well/how much they can do with this game. Or at the very least, I'd like to know their thoughts on it, if we have time.

If that does happen, I'll let you know what everyone thought.

And even if it doesn't-- I'll let you know how it goes when I try my hand at finding out everything that can happen. :)

Have a nice day!

This game is adorable. I love the character so much and just really want to give them a hug. I wish there was a bit more to the game though- maybe more objects depending on the mood, or a way to talk to the other. Over all, amazing game, I really enjoyed myself!

After I commented this, I played again and they asked me if I wondered why I could hug the ball and not them. Very clever, you put it into the game before I even requested it. Lol. I am in love with this game.

Yes, I would like to add more interactive objects, but I had to cut short because of time limitations. I was working on it alone and I tried to fit as much content as I could within my limited resources ^^'

I'm happy beyond imaginable that you enjoyed it! These comments made my day! *___*

<3 thanks for making this wonderful game! The graphics are amazing for  it just being you on a time frame! If you update the game or even turn out something new, be sure I'll play it! 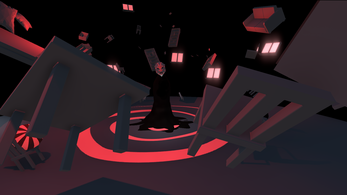 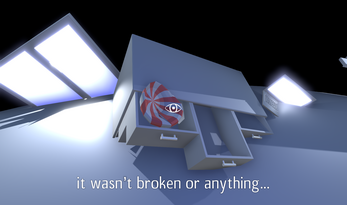 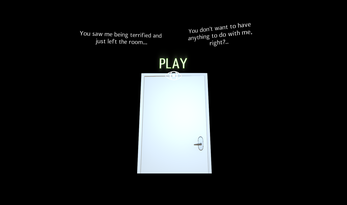 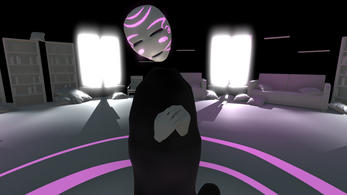 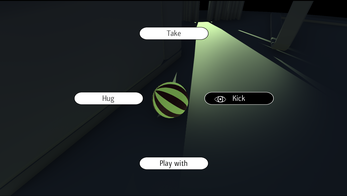 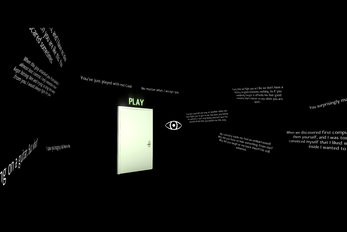 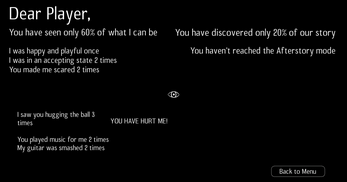